"The Chicago Force, (women's tackle football), started  using the Hawk Eye DVD about 3 years ago and since that time we have put together three  consecutive undefeated regular seasons.  Additionally, we have had one player on our team lead the league in receiving two of the three years.  I plan on using this DVD with the USA Women's National Team in 2013 and my high school in the fall of 2013."

Hawk Eye Sports Vision Training is the first and only DVD based training system for the muscles of the eyes.  Since 2009 Hawk Eye has been helping athletes improve in the areas of TRACKING,  PERIPHERAL VISION, FOCUSING, CONCENTRATION, STAMINA, REACTION and VISUAL MEMORY.

Did you know that the eyes themselves are not what actually allow you to see? They are simply a conveyance for messages sent from the brain, via the optic nerve.

Similarly, did you know that only one-sixth of your eye is even visible to the outside world? Or that your eyes are comprised of more than two million intricately connected working parts?

And that’s just the beginning! Here are 10 fascinating facts about the eyes.

1.  Your eyes focus on 50 different objects every second.
2.  The only organ more complex than the eye is the brain.
3.  Your eyes can distinguish approximately 10 million different colors.
4.  It is impossible to sneeze with your eyes open.
5.  Your eye is the fastest contracting muscle in the body, contracting in less than 1/100th of a second.
6.  80 percent of all learning comes through the eyes.
7.  Your eyes can detect a candle flame 1.7 miles away.
8.  Your iris (the colored part of your eye) has 256 unique characteristics; your fingerprint has just 40.
9.  The optic nerve contains more than one million nerve cells.
10.  The average person blinks 12 times a minute.

Hawk Eye Sports Vision was instrumental in our success at Godby High School in our pursuit of the 2012 State Championship.  We believed in it so much we incorporated it in to our physical education classes.

Videos and interviews about Hawk Eye and some about sports vision training.

"I got the Package Thursday, after using it for three days I can notice a difference in my vision, I caught passes today with ease and did't drop a single ball." 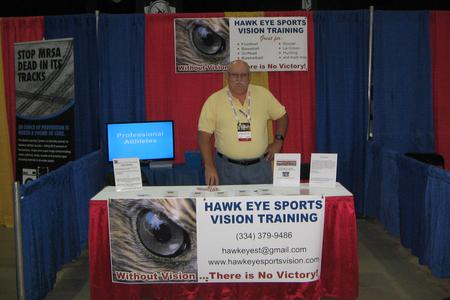 What is
Sports
Vision Training?

Concussion
Research 2
Without Vision, There Is No Victory!

SATISFACTION GUARANTEED or MONEY BACK!!!